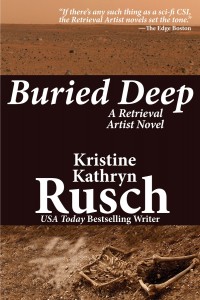 WMG Publishing has just released the next Retrieval Artist novel, Buried Deep, in e-book format.  The wonderful cover is by Jonathan Kort. You can order it on your Kindle, through Barnes & Noble, Smashwords or on other e-bookstores.  You can also get an audio version on Audible.com.  The trade paper edition will be available in the fall.

Here’s the back cover blurb to whet your appetite, followed by a link to an excerpt.

A cold case starts it all—human bones discovered beneath the Martian soil in the alien Disty’s main city. The Disty evacuate, believing the area contaminated. Forensic anthropologist Aisha Costard investigates and discovers that the bones belong to a woman last seen thirty years before.

But the woman didn’t vanish, nor did anyone believe her dead. She Disappeared, along with her children, after being charged with crimes against an alien civilization. Costard believes the children hold the key to this mystery, but she can’t find them on her own. So she returns to the Moon to hire Miles Flint.

As Flint investigates, events move swiftly around him, and suddenly what began as a simple murder case turns into an incident that might destroy the entire solar system….

“Here’s Rusch’s genius: She doesn’t confine herself to the rules of any one genre. She does world-creation and social criticism like the best sci-fi writers; she creates crime stories that would be Best Episodes on Law & Order or CSI; and she creates stories of human relationships that rank her with the finest character writers working today.”
—New York Times bestselling author Orson Scott Card

Announcing The Next Retrieval Artist Novel »