All 8 novels from this blockbuster saga in one boxed set.

In the domed cities of the Moon, between human greed and alien laws, between morality and justice, one man stands at the apex between right and wrong. Miles Flint, no stranger to tough cases, walks a razor edge as he and others struggle to save the Moon from total destruction. And in Flint’s world, the truth always comes with consequences.

“The Retrieval Artist universe is rich and exciting, and Rusch’s characters are real beings (Human and otherwise) struggling against overwhelming odds. The thrills are nonstop, and the tension keeps increasing with each successive book [in the Anniversary Day Saga]. If you’re a nail-biter, you might want to wear gloves for these.”
—Analog

The End of the Saga! 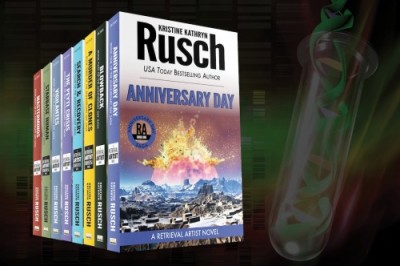 Eighteen months ago, I thought the Anniversary Day Saga would never end. I wrote a part of it, finished that, then wrote another part, reassembled the entire story, and wrote yet another part. Eventually I figured out how all the pieces went together. But for someone like me, someone who jumps from project to project, this particular series proved challenging. It took all of my attention and then some.

When I finished, I worried how the fans would react to getting six books in six months to read the entire saga. I figured a handful would do that; the rest would either read it all when the saga ended or would buy a book occasionally. I never expected so many of you to follow me, month to month, on this journey. I am happily surprised.

The one-per-month release ends today with the publication of Masterminds. I’m partly relieved that the second phase of this project is over. But I’m also pleased that the third phase can begin. That phase will start in July, when WMG Publishing promotes the entire series as one giant unit. 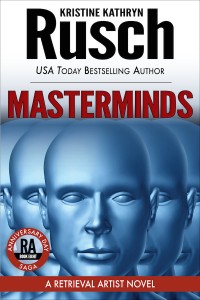 So many of you will already be ahead of that promotion. By July, you will have read or listened to the entire saga. Thank you! I hope you enjoy it.

The reviewers have been kind so far. Publishers Weekly says,

Rusch juggles the ensemble cast and numerous plots skillfully, offering up a cerebral thriller that’s part mystery and part action-drama with a ticking countdown. The human element plays well against the tense atmosphere, and frequent scene shifts help provide a sense of momentum and foreboding. While it’s almost essential to have read the previous installments, this is a very strong payoff for the series.

And Futures Past and Present says,

Rusch has attempted an ambitious project, one that succeeds. I think it’s one of the major science fiction stories of the year.

Masterminds wraps up the crisis, but it doesn’t end the Retrieval Artist series. Miles Flint will be back, and so will some of your favorites, old and new. I’m not yet sure when the next book will hit print. I’m still recovering from this large saga. But I promise, you’ll be the first to know when it does.

In the meantime, here’s Masterminds. I hope you enjoy it! —Kristine Kathryn Rusch 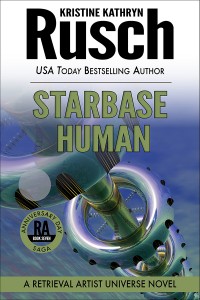 The seventh—seventh!—book of the Anniversary Day Saga hits the stands today. I have to admit, I had the most fun writing Starbase Human. It has a lot in common with the Diving books, even though this novel is in the Retrieval Artist Universe. Starbases, explosions, murders, and threats of war fill this volume. (Yes, I said “war.”)

I’ve said over and over again that this story is big, and in Starbase Human, you should start to get a sense as to just how big.

You can now buy the ebooks on all sites, the audiobook, and the trade paper. If you can’t find the paper book in your favorite bookstore, ask them to order it. Because as of today, Starbase Human should be available everywhere books are sold.

You will still have to wait one month for the end of the Saga. The reviews are starting to come in. I won’t quote all of the Publishers Weekly review, because there are spoilers, but here’s their conclusion:

“This deeply satisfying eighth entry…is a very strong payoff for the series.”

I love the phrases “deeply satisfying” and “very strong payoff.” That’s what I was going for. You can preorder Masterminds on Amazon, Kobo, and iBooks. You can also preorder the audiobook from Audible. The trade paper edition and the other ebook editions will be available on June 9, 2015.