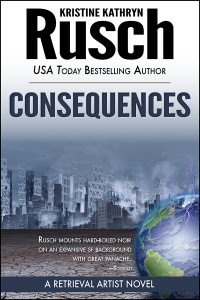 A woman dies in the domed city of Armstrong on the Moon. Detective Noelle DeRicci discovers that the victim is a Disappeared-an outlaw in hiding wanted for crimes against an alien civilization. Only DeRicci’s old partner, Retrieval Artist Miles Flint brought the Disappeared home, something he would have only done if he believed the alien government would exonerate her for her crimes.

But Flint and DeRicci are no longer partners; in fact, they’re on opposite sides of the law. Flint can’t tell DeRicci about his client’s role in a war between humans and a mysterious alien race. The Disappeared’s death is only the first volley in an escalation of that war, a war that threatens to engulf the entire solar system.

Kovac huddled against the edge of the crevasse. Below him, the massive rip in the glacier extended several hundred meters, narrowing as it deepened. He had no idea how deep the crevasse was, but he knew that a fall would kill him.

His white environmental suit, with crampons extended along its surface, clung to the smooth ice, leaving his hands free. One of them clutched the rifle, while the other remained at his side.

His feet dangled over the emptiness below him, but he knew better than to brace them. Too much pressure on the side of the crevasse could cause an avalanche, and then the month he had spent out here, scouting the proper location, would be in vain.

His head barely popped out of the crevasse; only his eyes and nose were exposed to the surface elements. He’d left the helmet off the environmental suit: he didn’t have to worry about the oxygen content of the air, and, he hoped, he wouldn’t be here long enough to expose his skin to the dangers of deep cold.

The part of the glacier in front of him angled downward, and with his far-range vision goggles, he could see the village nearly forty klicks away as if it were right next to him.

The village was laid out on a grid pattern, with buildings made of a local concrete-like substance that could hold up to the valley’s harsh winters. The buildings were white against the green of locally grown plants.

Vehicles weren’t allowed there, so the streets were narrow, except for the market square, which filled every summer with makeshift booths and open tables selling handmade goods and produce, just like humans had done since time immemorial.

At the moment humans did crowd the square. That was the most unusual aspect of this place: the fact that only humans were here. No aliens of any sort visited—and the natives, if there had ever been any—were long gone.

Trieinsf’rd was the farthest Kovac had ever gone on assignment. Nearly two years’ travel outside of Earth Alliance space, Trieinsf’rd was an outsider’s paradise. The planet had been originally settled by a group who had rebelled against the Earth Alliance. Over the years, other colonies sprang up, none of them affiliated with Earth Alliance, and all of them containing people who wanted no contact with outside governments, for whatever reason.

The village below, called Nowhere by the locals, was as far away from anywhere as a person could get. It was in the only habitable valley in the northernmost continent on Trieinsf’rd—a valley that was hundreds of kilometers long and a hundred wide. But to get to Nowhere, a person had to cross three huge mountain ranges, most of them still covered by the glaciers that had carved the valley.

The mountains were so tall that regulation aircars couldn’t cross them, and the glacier was so fragile that most space yachts couldn’t land anywhere near it.

To get here, most people had to rent a specially designed vehicle from one of the towns at the very edge of the first mountain range. Once one of those vehicles got rented, the leasor notified the authorities in Nowhere that someone was coming.

Kovac didn’t want to notify anyone. He had bought his own vehicle off-world and had one of his partners serve as a driver, launching illegally off his space yacht over Trieinsf’rd’s Black Sea. Kovac had flown the vehicle low, landing it in a bowl about four klicks from here, then hiked to the crevasse.

The rifle felt sleek against his hands. The environmental suit sealed around his wrists, leaving his hands untouched by any fabric. He didn’t wear gloves. Instead, he wore two layers of DuraSkin—enough to ensure that he wouldn’t get frostbite, but not enough to interfere with his own delicate nerve endings.

He needed the sense of touch. The rifle was a fragile weapon, built for extreme conditions, and accurate only in the hands of an expert. The slightest thing, from the thickness of fabric to the infinitesimal vibration of a finger, could cause a shot to go wild.

Kovac had worked with rifles most of his career, and knew most of the hazards. Still, other problems could arise without warning, and in cases like this one, where he would only get one chance, he didn’t dare make any errors.

He’d even made the bullets himself, something he had learned to do after the last disastrous job. Because this job was so important, he’d used a combination of water and a lightweight poison to create the pellets. That was the nice thing about ice: the evidence melted.

Not that anyone would be able to trace him. He was, as he had always been, a ghost. But he had learned long ago that there was no such thing as being too careful.

With his free hand, he adjusted the goggles, making certain that the glare from the ice field around him wouldn’t affect his accuracy. He focussed on the doorway that the Tracker had told him about. It was behind a booth selling Earth produce—strawberries, asparagus, red bell peppers, all obviously from a greenhouse.

If the Tracker’s information was correct, the woman would emerge within the next five minutes. She would put a hand over her eyes, shading them from the thin sunlight as she surveyed the area around her. Then she would grab a basket from beside the door and begin her daily shopping.

Worried, yet not worried. Believing, deep down, that she was safe after all, not realizing that she had been found nearly a year before, and watched for six more months before the Tracker even contacted Kovac.

Kovac’s heart pounded harder than usual, and he could feel the chill air sting his face. If she didn’t come soon, he would have to retreat, set up again the next day, hope that his normally reliable source hadn’t failed him for the first time.

Then the door opened. The woman stood inside the threshold, younger than he had expected. Her skin was soft, the color of the sand found on the Atlantic coastline of his childhood. Lines had formed around her brown eyes, but they were laugh lines, which he also hadn’t expected.

Somehow he had thought she would be old and miserable, sorry she had been trapped in this godforsaken place. Sorry for the choices she had made.

She wore a dress made of material so thin that he could see her nipples through the cloth. No protective gear underneath, nothing to shield her from weapons fire. She had obviously adopted the credo of the community, the belief that they were so far away from human settlement that they were safe.

He used the suit’s crawl circuitry to help him move upward. He set the crawl for a decimeter—enough to get his shoulders above the mouth of the crevasse. He had programmed the suit for a fragile ice field and hoped that the suit’s actions would be as delicate as they had been in simulation.

As he rose, his perspective shifted. He was looking down on the village now, his view of the market square like one that a man would have if he stood on a rooftop.

Kovac didn’t like it. He wanted a direct shot, not an angled one.

He waited until the suit finished its climb, then he adjusted the goggles again, but he still couldn’t get the perspective right.

He glanced up, saw nothing except a pale grayish sky—the color Trieinsf’rd’s distant sunlight created as it flowed through the planet’s odd atmosphere. He shuddered, not from the cold, but from the isolation.

He hit the crawl again, and this time eased himself out of the crevasse entirely. He moved away from the opening, and sprawled on the ice field.

Then he lined up as he used to, decades ago, when he trained on Earth using conventional weapons—real rifles shooting real bullets, as they had for hundreds of years. He’d always preferred those weapons, thinking that a man couldn’t truly be a sniper without one.

After he settled, he adjusted the goggles again. His angle was direct, just like he wanted.

Only he had wasted time. She had moved away from the door, mingling in the crowd, beginning her shopping by examining the strawberries at a nearby booth. She held up the little carton, apparently looking to see if any of the berries had been crushed, and as she did so, the little man behind the booth talked with her.

Kovac didn’t know what direction she would move in after she finished with the strawberries. The Tracker’s diagram of her day made it clear that she had only one routine—the one Kovac had just missed when she left the door.

But he didn’t want to hurry. If he hurried, he risked making an even bigger mistake. He risked shooting and missing—warning her, allowing her to escape once again.

She set the strawberries down, shook her head slightly, and turned, facing Kovac, exposing the front of that too-thin dress.

He steadied himself, steadied the rifle, concentrated on being motionless—motionless except for the flick of his right forefinger, the one that controlled the trigger.

He almost didn’t hear the shot. The puff of air, the slight sound vibration as the pointed piece of ice left the rifle and zoomed down the glacier at a velocity even his airglider couldn’t achieve.

Velocity, the strength of the ice, and his aim would cause her death. But he had the poison as a backup: a trace of it in her system, from the outside edges of the bullet, melting from the friction in the air, melting even more as it absorbed her body temperature, would kill her even if the bullet failed.

She moved toward the center of the market, just a millimeter off, a millimeter that he hadn’t anticipated, that he could do nothing about.

Kovac held his breath, watched through the goggles, his finger still wrapped around the rifle’s trigger.

Then she staggered back, raised a hand as if warding off a blow. The hole wasn’t immediately visible, lost in the drab brown of that dress.

People exclaimed around her, going through what looked from this distance like a grim parody of panic.

She hit the wall behind her, hand still raised, and slid to the ground, a red stain leaving a trail on the white concrete.

Kovac let out his breath then. He’d hit her. Whether she died now or later, whether they thought they could save her or not, it didn’t matter. Her life was over.

He had done his job.