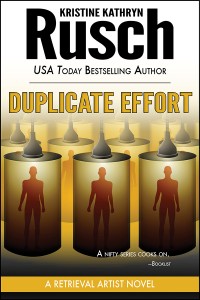 Retrieval Artist Miles Flint has a mission: take down the law firm of Wagner, Stuart, and Xendor. He enlists the aides of old friends and old enemies. But as the mission gets underway, one member of his team dies horribly.

Flint can no longer take on the entire universe. He violated the rules of his Retrieval Artist mentor and now has a lot to lose. But he can’t reverse the events he set in motion—and the crisis he caused might destroy everything—and everyone—he loves.

Ki Bowles skipped down the steps outside InterDome Media, trying not to smile. She had been offered her old job back. Twice the salary, three times the visibility.

She had turned InterDome down.

This close to Armstrong’s downtown, the sidewalks were crowded in the middle of the day. Dome Daylight was on full, simulating an Earth summer day, and everything seemed etched in a kind of well-lit clarity, the kind that a domed community on the Moon didn’t often achieve.

She thought it appropriate to her mood. She was seeing not only all the business people around her, but the edges of the buildings and the entries into the alleys—things that were usually shrouded in a kind of permanent twilight.

No one could hide on a day like today. No one could pretend to be something other than what they were.

She stuffed the scarf she’d been carrying into the bag she had slung over her shoulder. Her long hair, which she’d dyed black, silver, and deep red just before she recorded the first in-depth independent piece, flowed around her—her old, trademark look, one that used to attract attention and still did, even now.

For once, she didn’t care. That was why she no longer covered up her hair with the scarf. For the first time in almost a year, she didn’t mind being recognized. She wasn’t back on top, not yet, but she was clawing her way up the ladder, one treacherous rung at a time.

By the time her series on the law firm Wagner, Stuart, and Xendor ended, she would be the most famous investigative reporter in Armstrong, maybe even in the Earth Alliance. She would receive a lot more offers than the one from InterDome Media, and she might not take any of them.

She might continue to freelance and keep control of her life.

Miles Flint had been right when he’d given her this story six months ago.

You’re ruthless, Ki, he had said. You want the story more than you want to protect people’s lives and reputations. You have no real ethics. If you think you can bring someone down, you will, without regard to the effect on their lives.

Much as she hated the characterization, she had finally accepted it. The difference between the woman he had accused of being ruthless and the woman she was now was that now she demanded real documentation. When she worked as an investigative journalist for InterDome, they had wanted two pieces of proof for every claim, but the pieces could be as flimsy as two different people saying the same thing without backup.

On the WSX stories, she demanded hard, cold evidence, things that would stand up in court. In case she got sued, she had stored all the documentation with Flint’s lawyer, Maxine Van Alen.

And Bowles would get sued; she knew that much. There had always been rumors that Wagner, Stuart, and Xendor, the Moon’s largest law firm and one of the largest law firms in the Earth Alliance, had participated in illegal deal making, but now she had proof. That proof showed that WSX had profited while harming its own clients.

She expected WSX to come after her first, followed by several of its high-profile clients. Van Alen wouldn’t represent Bowles—there was a large conflict of interest that Bowles didn’t entirely understand—but Van Alen had gotten Bowles the best libel, copyright, and defamation attorneys in the Earth Alliance.

But Bowles didn’t trust the new attorneys enough to keep her research with them. She trusted Van Alen, who had been there when Flint hired her. Van Alen had some involvement in all of this, and Bowles didn’t know what it was.

At the moment, she didn’t care. She had the story of the century, and she was going to use it to revive not just her career, but her entire life.

The success of her introductory piece, which had run for the first time on the news nets only the night before, made her giddy. By morning, everyone had watched the story, and it had already made the regular news bulletins all over the galaxy.

Her face was plastered everywhere—and a lot of the coverage began with this kind of lead:

Award-winning investigative reporter Ki Bowles has returned with the first in a series of hard-hitting stories about controversial law firm Wagner, Stuart, and Xendor. Bowles, who was fired from InterDome Media earlier this year for an accurate but widely misinterpreted story about the Moon’s Security Chief, Noelle DeRicci, claims she has documentation from confidential sources that proves WSX has sold out its clients in return for great profits throughout the Alliance.

Just a few days ago no one would have acknowledged that Bowles was an award-winning reporter, let alone the fact that the story that had cost her the job at InterDome had been accurate.

All of this was just what she had hoped for. She was going to buy herself lunch at the Hunting Club, one of Armstrong’s most exclusive restaurants, just to celebrate. She wished she could invite Flint to join her, but she knew better.

He hated her and made no secret of it. Noelle DeRicci had been his old partner when he had been a police detective, before he quit it all (under mysterious circumstances) and became a Retrieval Artist. He never forgave Bowles for that piece she ran on DeRicci, and sometimes Bowles wondered whether she got this job because Flint didn’t mind making Bowles a target.

He had certainly been clear about what she was getting into.

You’ll be headlining these stories, he said. WSX will come after you. If Justinian Wagner is feeling particularly threatened, he won’t finesse it. He might even try to have you killed.

Because of those statements, Bowles had added a condition into the deal she was making with Flint. She would take full ownership of the investigative reports she was doing, and he would pay for a security detail for her.

He had agreed to both conditions and had set a few of his own. He doled out files, which she had come to realize were confidential WSX files. He seemed to have a lot of them.

She still hadn’t seen everything, but she didn’t mind. Too much information would probably get in the way. It would be too tempting. With the slow flow of information, she was able to verify each piece, and put it in a coherent form.

Then she did her own research, interviews with former employees of WSX and digging into the public records, comparing what she knew with what had been reported long ago.

That last had been her salvation. Initially, no one wanted to buy the series of investigative pieces from her, so she had to sell them one by one. The only taker had been a small media player out of Earth—Upstart Productions.

Upstart hadn’t paid much, but they hadn’t bought much, either. So when the story caused the uproar that it did as quickly as it did, it filled Bowles’s bank account, not Upstart’s.

Upstart had gotten free publicity and a larger market share than they had ever imagined they would, though.

She turned down the exclusive side street that led to the Hunting Club. The Club had bought the entire block, planting it with real trees that cost a small fortune to maintain, and put in grass of a kind found “in the forests of Earth,” whatever that meant.

As she stepped into the Club’s forest, she glanced over her shoulder. The security detail hung back, like it was directed to do. She had already told the company of her plans—a visit to InterDome, followed by lunch at the Hunting Club, and then work at the studio. They had divided their team among all three locations.

She figured she would be the most vulnerable during the week after the first piece ran, which was why the team had spread out to all three locations. Usually, two bodyguards followed her everywhere, but for the next seven days members of the team would clear anyplace she was going before she arrived, as well as having two bodyguards accompany her.

A breeze blew through the trees, carrying with it the scent of green leaves and warmth. She stopped, tilted her head back, and inhaled deeply. She knew the breeze was fake, but it was a fake she could appreciate.

Especially when she was on the top of her world.

Then something tugged at her bag.

Bowles let the bag go like she’d been trained to do, but she was already off balance.

Someone grabbed her, wrapped an arm around her throat, and another around her waist, pulling her back into one of the trees.

“Help!” she screamed. She sent the message along her links at the same time. She used her emergency links as well as the links to her bodyguards. “Help!”

She wasn’t panicked—which surprised her—because she had been expecting an attack.

But she hadn’t expected one here.

The security company should have expected it here, too. Dammit, where were they?

The man—she was convinced it was a man, just by the hairy arm wrapped around her neck—tugged her into the trees. He smelled of garlic and sweat and something a bit more pungent—fear? What did he have to be afraid of? She was the one with an arm around her throat.

He hadn’t cut off any air, although the grip on her stomach pinched. She let him drag her into the trees as she fished for her bag. It hadn’t fallen off. In it, she had a small defensive laser knife, just for a moment like this.

The bag was halfway open—the stupid bastard should have tossed it—and she reached in, her fingers closing around the coolness of the laser. She found the depression that turned the weapon on full, then brought it out—

Only to have another man emerge from the trees, grabbing the laser from her hand. He turned it on her, slashing just below the man’s grip on her stomach.

Hot pain seared through her skin and she would have doubled over if the bastard had let go of her. But he hadn’t. She flailed at him—panicked now—striking at everything.

The other man came toward her, the red blade still active, and pointed it at her face. She turned away at the last moment, and heard the man behind her scream.

Maybe the men weren’t working in tandem. Maybe the man with her laser knife was trying to rescue her. Maybe he had hit her by accident as he went for the other man’s arm.

Then something red flashed near her right eye and the pain seared down her face, cutting into her cheek and her mouth. She couldn’t scream if she wanted to.

She was thrashing now, kicking and flailing, her entire body as much of a weapon as she could make it.

C’mon, c’mon, she sent to the security people. Help me.

The redness slashed across her throat and she made a gurgling sound that panicked her even more. If she survived this, she would need surgery; she wouldn’t be able to talk or to breathe on her own—

Like she couldn’t breathe now. Black dots ran across her vision.

She couldn’t pass out.

She would die if she passed out.

She willed herself to stay awake—

And fought the darkness, even as it took her away.